Right To Health: A Free Concert to Raise Awareness of HIV-AIDS

In an effort to raise awareness of the HIV epidemic and help fight the stigma against people living with HIV, the DOH-RITM AIDS Research Group will be holding a free concert dubbed “Right To Health” at the SM Southmall (front parking lot) on December 1, 2017, from 6 pm onwards. 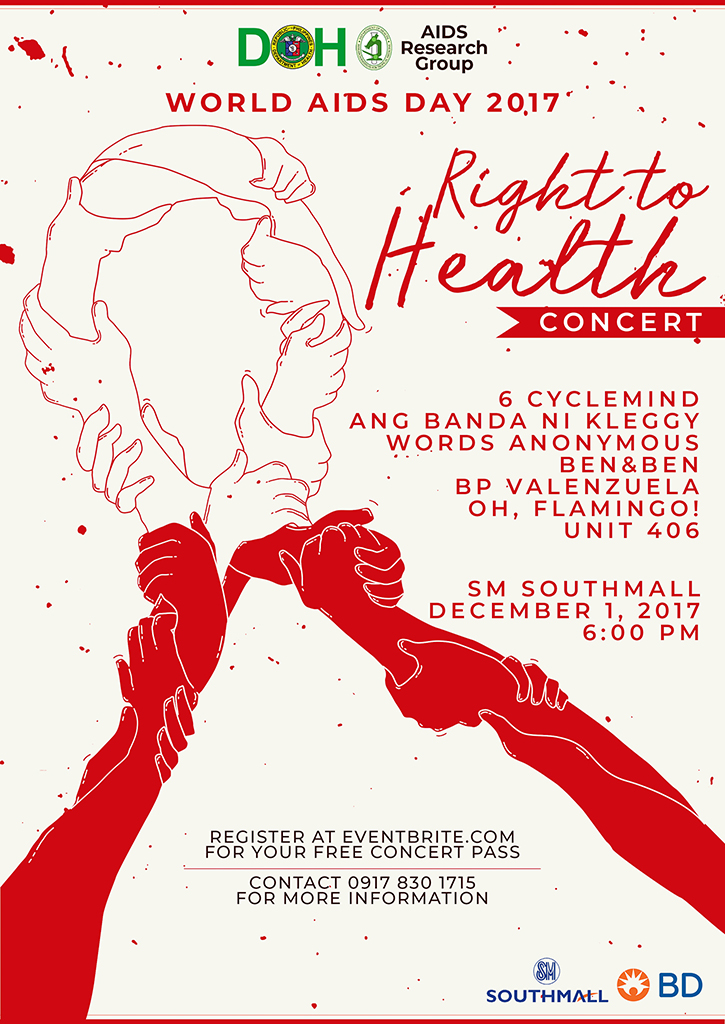 The event is in conjunction with World AIDS Day—a global initiative that provides an opportunity for people to unite and take a stand in supporting vulnerable groups living and affected by HIV.

To show solidarity and harness the power to influence and educate the youth, local music acts such as BP Valenzuela, Oh Flamingo, Ben&Ben, Words Anonymous, Banda Ni Kleggy, Unit 406, and 6 Cyclemind are joining the crusade with performances that will surely entertain the crowd.

Spoken-word ensemble Words Anonymous are also set to perform spoken-word pieces that deal with HIV-AIDS prevention and control, as well as combatting the stigma and discrimination that many people living with the condition experience on a day-to-day basis.

Aside from the cultural and music performances, winners from the recently concluded STRAINS Filmmaking Competition and ART Attack Visual Poetry Contest will be announced during the event. Both platforms (filmmaking and visual arts) play a significant role in encouraging millennials to join the cause in the most creative and imaginative way possible.

The Right To Health Concert is also supported by BD, a global medical technology company that is advancing the world of health by improving medical discovery, diagnostics and the delivery of care.

Entrance is free, but priority will be given to those who register at Eventbrite. To get free passes, log on to bit.ly/righttohealthconcert. A registration booth will also be set up at 1 pm on the event day.

This is a press release from the DOH-RITM AIDS Research Group. Minor edits were made by Philippine Primer editors.