Bryan White in Manila: Singer Gets Up Close and Personal For His September Concert

Another Bryan White in Manila concert is set to hit Music Museum on September 15.

The American country music artist, the hit maker of the love song “God Gave Me You,” is coming back to Manila for his “Up Close and Personal” concert. 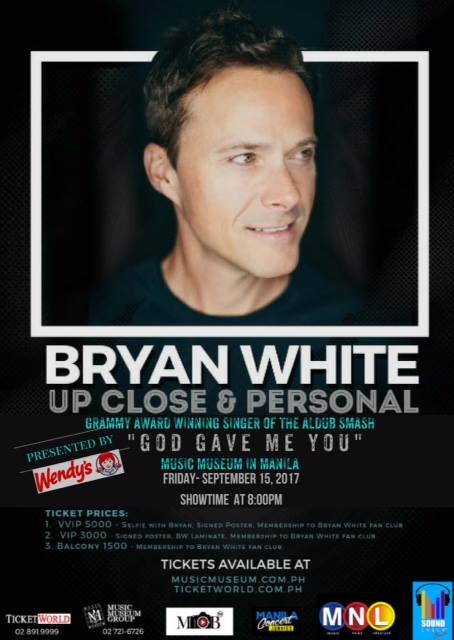 Bryan White last went to the country in 2015, as his song was popularized by hit love team Aldub, consisted of Alden Richards and Maine Mendoza. The song was first released 16 years ago.

“I’ve never been to the Philippines, and people have been telling me for years that I need to come here,” Bryan White once told the Filipino in his concert last December 2015, Rappler reported.

In his concert, Bryan White is also tagged as the “Grammy Award Winning Singer of the Aldub Smash.”

Aside from this, Bryan White was also known for his songs “Someone Else’s Star,” “So Much Pretending,” and “From This Moment,” which he collaborated with Shania Twain in 1997.

Fans will be treated to a more intimate time with the singer as VIP tickets secure a chance to have a selfie with him, signed poster, and a membership to the Bryan White fans club.

For tickets, reservations and more information about Bryan White in Manila concert, check out TicketWorld.

What: Bryan White: Up Close & Personal