Repertory Philippines (REP) is going golden (50 years!) and they’re inviting everyone to come and commemorate the event for one special night.

Since the company’s start in 1967, REP has been bringing the best of Broadway and the West End for local talents to produce and for Filipinos to enjoy—all as part of their mission to promote and develop the performing arts for Philippine cultural growth. In half a century, REP has run 80 seasons staging over 443 productions, including some of the most well-known plays: Les Miserables, Evita, Sweeney Todd, and Romeo and Juliet.

Under REP’s Children’s Theatre, which the company created to expose younger audiences to live performances and to inspire them with different stories, REP has shown plays such as Hansel and Gretel, Camp Rock, Snow White, and The Sound of Music.

The theater company prides itself not only in its impressive lineup of productions, but with their homegrown talents that have been part of REP through the years. Television and movie actors such as Heart Evangelista, Jodi Sta. Maria, and Sam Concepcion are just a few among the many who have called REP their home. A number of theater stars who’ve made their way to the West End and Broadway, most notably Lea Salonga and Monique Wilson, are also part of the REP family. 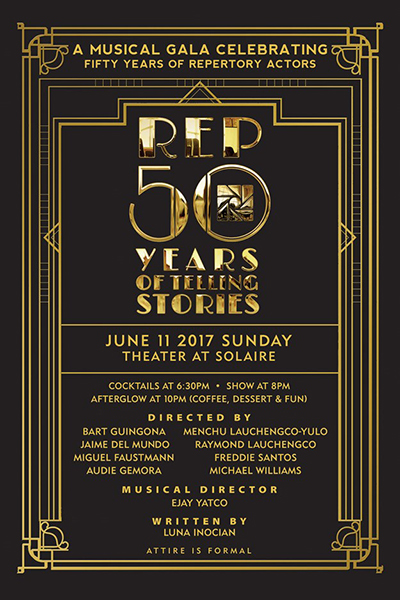 Get your tickets now for Rep’s 50 Years of Telling Stories happening on June 11, 2017, at the Theater at Solaire.

This year, everyone whose lives were touched by REP will come together for one night to celebrate the company’s successes. On June 11, 2017, at the Theater at Solaire, REP is holding “50 Years of Telling Stories,” a musical gala to celebrate 50 years of the country’s premier theater company. Acclaimed director Bart Guingona will be at the helm of the show, with the musical direction of Ejay Yatco, and Luna Inocian as the writer.

Big stars such as Monique Wilson, Leo Martinez, Joy Virata, Miguel Faustmann, Michael Williams, Menchu Lauchengco, and Audie Gemora are coming home to REP and will take to the stage to perform. With these amazing talents all coming together for one night, the show is set to be a can’t-miss event for anyone and everyone with a love for music or theater.