Neymar Jr’s Five World Championship is just around the corner, and the country is looking to send its best five-a-side team to go up against the rest of the world. Bear witness as Red Bull crowns the Philippine representative at Neymar Jr’s Five Philippine Finals, happening at SPARTA Philippines in Mandaluyong City this March 4. 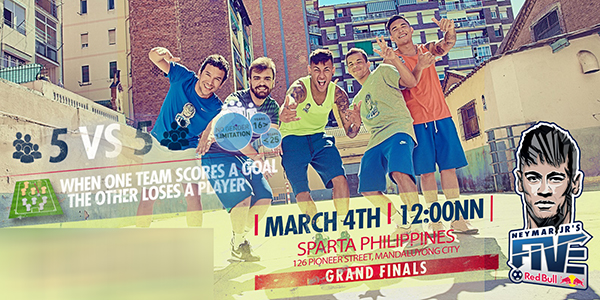 Neymar Jr’s Five is based on five-a-side football. Five-a-side is a faster version of the standard football the world knows and loves: five players on each team instead of the usual 11, a smaller pitch, smaller goal, and its own set of rules.

Neymar Jr’s Five, however, takes this already fast-paced game and makes it go that much faster: 10-minute matches, with each goal you score takes away a player on the opposing team. It’s fast, technical, and tactical… and only the best team gets to play in Brazil.

This year’s final pits the country’s top eight five-a-side teams against each other. The last team standing will represent the Philippines at this year’s Neymar Jr’s Five World Championships in Brazil.