Faith and science clash in a murder mystery as Repertory Philippines presents Agnes of God this February 17 at OnStage Theater in Greenbelt 1. 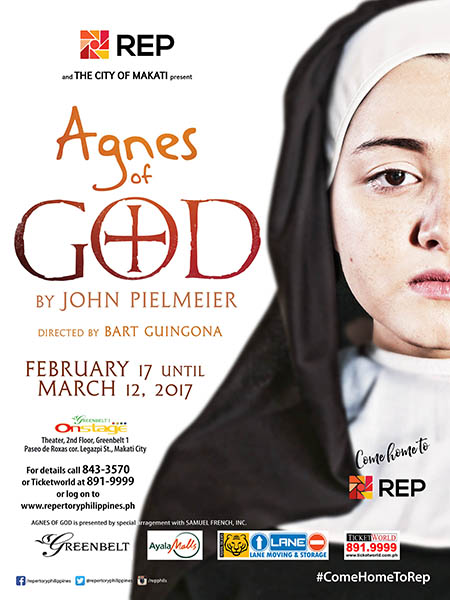 Dr. Martha Livingston is a court-appointed psychiatrist sent to evaluate Sister Agnes a young nun whose infant has been found strangled. With Agnes claiming a virgin conception and having no memory of giving birth, Livingston must distinguish between the lies and the nun’s perception-altering faith. Complicating her investigation, Livingston continually clashes with the overbearing Mother Superior Miriam Ruth, who insists that Livingston leave Agnes alone.

Agnes of God stars veteran actress Pinky Amador with Menchu Lauchengco-Yulo and Becca Coates playing the titular role of Sister Agnes. Repertory Philippines’ second play for 2017 is directed by Bart Guingona and will run from February 17 to March 12, 2017 at the Onstage Theater, Greenbelt 1, Makati City.