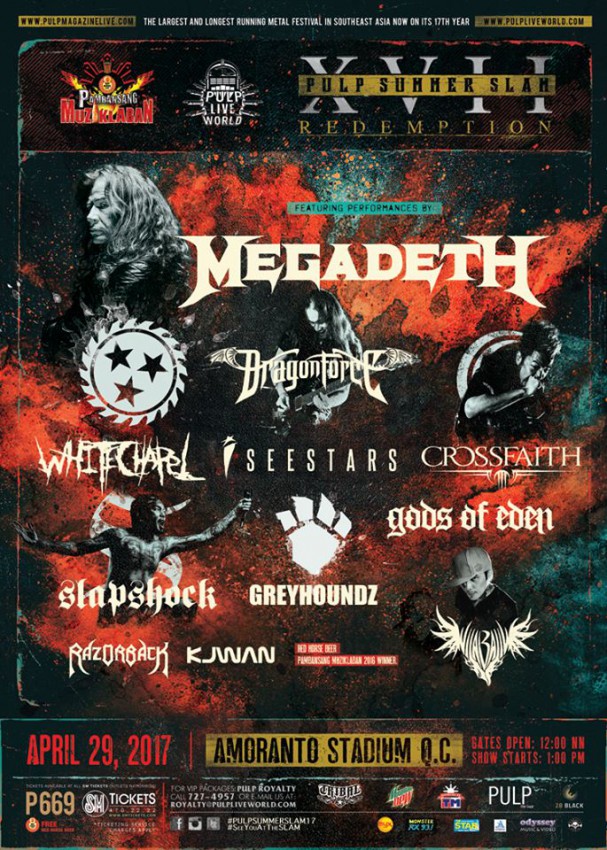 A member of “The Big 4” of metal and heavy rock music, Megadeth makes their comeback to the country after their solo concert back in July 2012. This year, they’ll lead the star-studded lineup of PULP Summer Slam, which features returning acts like Britain’s Dragonforce and Japan’s Crossfaith.

They’ll be joined by Whitechapel, I See Stars, and Australian progressive metal band Gods of Eden along with local favorites Slapshock, Greyhoundz, Wilabaliw, Razorback, Kjwan, and the winner of the 2016 Red Horse Muziklaban.

Tickets are available at SM Tickets for only P669 (ticketing charges apply). PULP Royalty tickets are also available at P10,000, which come with special and exclusive fan privileges. Send an email to royalty@pulpliveworld.com or call the PULP Royalty Hotline at 02-727-4957.

Visit PULP SUMMER SLAM on Facebook for the latest on PULP Summer Slam 17.