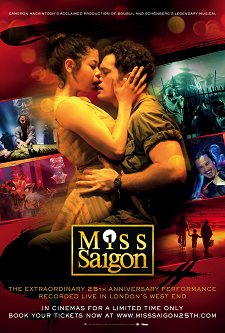 Fans of the legendary Broadway musical show Miss Saigon in the country can finally witness the world-class performance of musical artists around the world on big screen with its two-day showing at selected SM Cinema branches.

Miss Saigon follows the tragic story of a young bar girl named Kim, orphaned by war, who fell in love with American GI Chris. The musical is set in 1975 during the final days of the Vietnam War when the fall of Saigon happened.

Invite your family and friends to watch Miss Saigon this November and enjoy this 3-hour show starring Alistair Brammer and Eva Noblezada. Watch out for the special appearance of original cast—Jonathan Pryce and Lea Salonga. Buy your tickets now via smcinema.com.