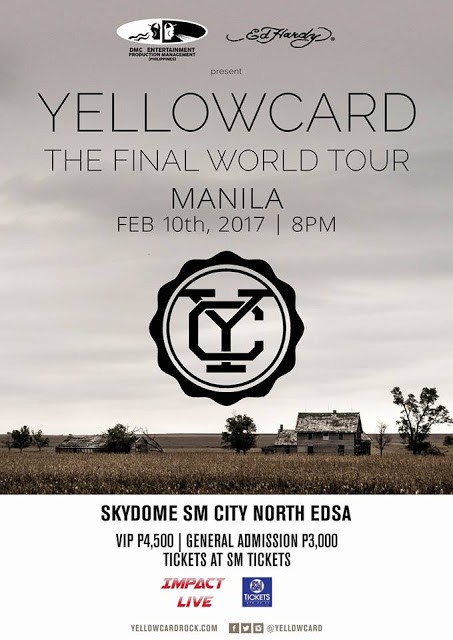 Get ready to scream at the top of your lungs as American alternative rock band Yellowcard is set to have their Farewell Tour on February 10, 2017 at the SM North EDSA Skydome.

Hailing from Jacksonville, Florida,  members Ryan Key (Vocals), Sean Mackin (Violin), Ryan Mendez (Lead Guitar) Josh Portman (Bass Guitar) are well known for its singles like “Ocean Avenue”, “Only One”, and “Lights and Sounds”. The group’s music is distinctive within the band’s genre because it features the prominent use of a violin. The band has released ten studio albums, with its most recent and final one, Yellowcard, released on September 30, 2016.

The band last came to The Philippines last December 12, 2014 at the SM North Edsa Skydome for their “Lift A Sail” album tour. This 2017, they plan to comeback and bid a rockin’ farewell to their Filipino Fans in their Final World Tour.

Tickets are now available at SM Tickets outlets and online at www.smtickets.com. Call 470-2222 for ticket inquiries.

What: YELLOWCARD: The Final World Tour