Goo Goo Dolls to perform live in Manila for the very first time! 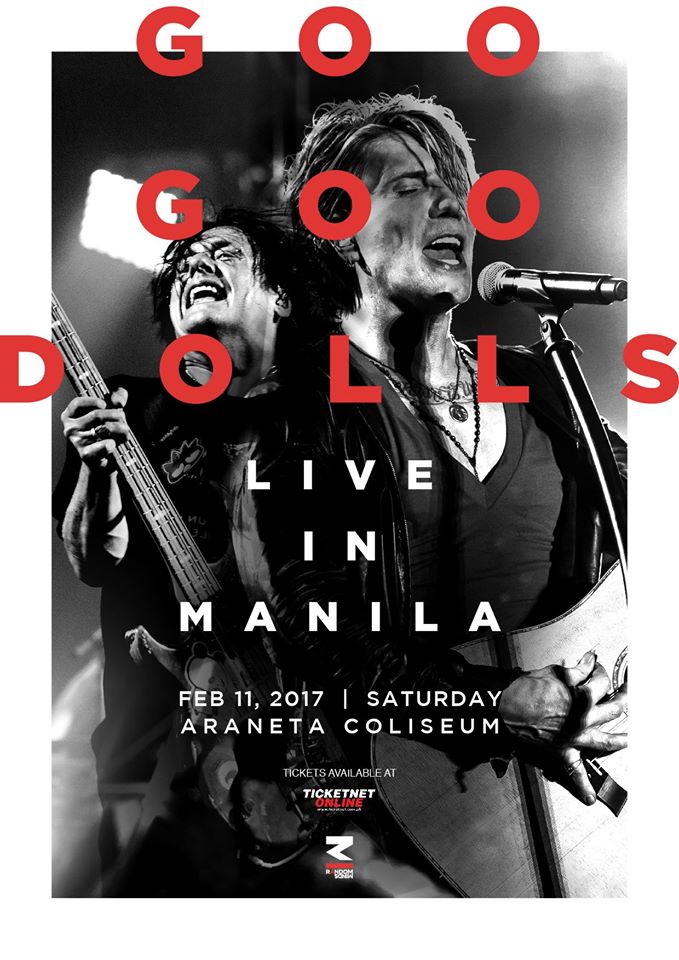 Get ready to sing your hearts out! American rock-band Goo Goo Dolls is set to perform in Manila for the very first time on February 11, 2017, Saturday, 8:00 pm at the Smart Araneta Coliseum, Cubao, Quezon City as support of their new album, Boxes.

Original members John Rzeznik (vocals, guitar), Robby Takac (vocals, bass), and George Tutuska (drums, percussion) started their career year in 1987 after they released their self-titled album, followed by the release of Jed in 1989. They’ve incorporated some elements of heavy metal, pop rock and punk rock in the following years and have made their song “I’m Awake Now” as soundtrack of the movie Freddy’s Dead: The Final Nightmare. Shortly after recording the band’s fifth album A Boy Named Goo, Tutuska was kicked out of the band, and hired Mike Malinin and joined them on tour.

A Boy Named Goo became one of the most successful alternative band albums of the mid-90s and was the first album in Metal Blade history to achieve double-platinum status. Not until the release of their single titled “Name,” which amassed commercial success and were able to make guest appearances on Beverly Hills, 90210, Charmed, and even presented an award to Michael Jackson. Afterwich, they rose to fame when Rzeznik was invited to write a soundtrack for City of Angels and wrote their famous hit, “Iris,” which stayed on Billboard Hot 100 Airplays charts for a record-breaking 18 weeks and  4 weeks at No. 1 on Billboard’s Pop Songs chart.

The band, who performed in front of their million fan and dominated the airwaves in the past years, is now back with their new album, Boxes.

According to Warner Bros. records, Boxes is a vibrant, sonically forward-looking album that manages to retain what their legions of fans love about the Goo Goo Dolls:

– indelible melodies, intimate, heartfelt lyrics, and the anthemic, uplifting vibe of their songs

– while pushing new boundaries in terms of sound and production [sic].”

Tickets will be available at all TicketNet outlets nationwide and online via www.ticketnet.com.ph starting October 15,  2016, 12:00 pm.

This event is brought to us by Random Minds Production.