UPDATE: Neverland Manila has been postponed to next year due to unfortunate circumstances. Ticketholders may either refund or hold on to their tickets for next year. For more information, you may visit Neverland Manila’s Facebook page for their official statement. 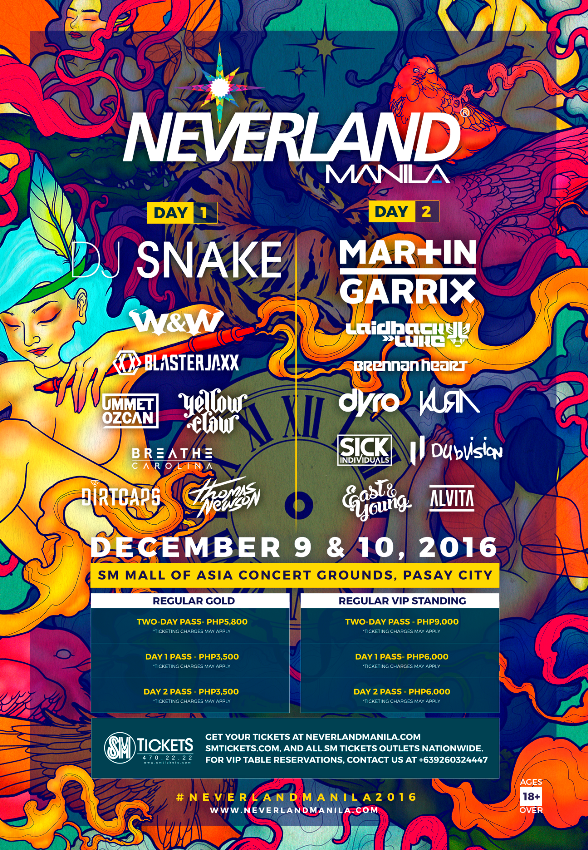 How far will you go in the name of love? End the year with a bang and heed the call of Neverland Manila, a celebration of love, unity, and youth—all in one weekend—for a music festival experience you will never forget. For the first time in the Philippines, a gathering of 17 the most influential DJs in the world will play in one massive stage.

Slated to take place on December 9&10, 2016, headlining the biggest EDM event of the year are DJ Mag Top 100 DJs Martin Garrix and DJ Snake, whose tracks have garnered nominations and awards from different music awards. With their tracks a staple in every playlist,Garrix and DJ Snake are expected to perform their chart toppinghits at the Neverland Manila stage alongside other topnotch artists such as Laidback Luke, Yellow Claw, UmmetOzcan, W&W, Dyro and Blasterjaxx. Be in the middle of all the festivities as more international acts—including the much-awaited performance of hardstyle DJ Brennan Heart—join the powerhouse team for a 2-day musical eventat the SM Mall of Asia Concert Grounds.

One of the biggest events to happen in the metro, Neverland Manila sets the bar yet again in giving world-class entertainmentto the Filipino EDM audience and fans with its impressive roster of artists and production.

For attendees 18 and above only. Get your tickets at smtickets.com, and all SM Tickets outlets nationwide. For VIP table reservations, contact (0926) 032-4447. For more information, visit their website at www.neverlandmanila.com.