Get your vocal box all ready to sing along again with Pentatonix as they bring back their golden voices for second concert in Manila this September! 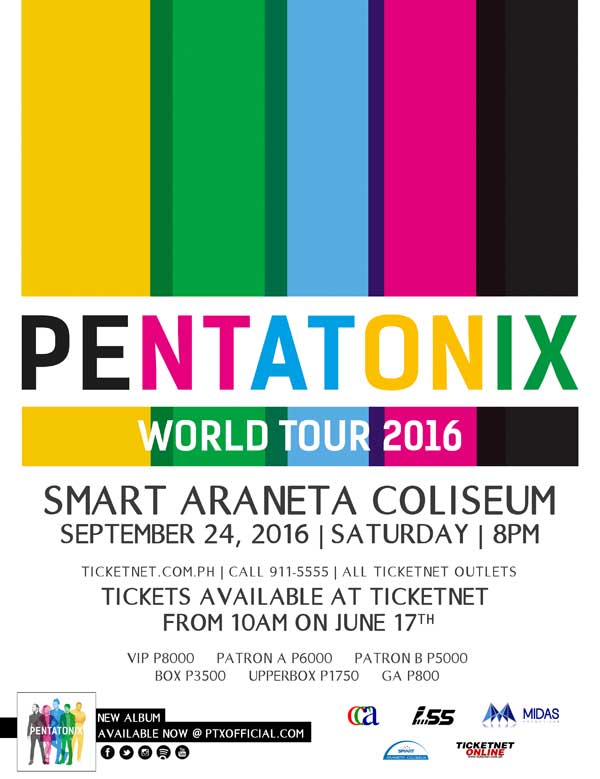 Pentatonix is an American a capella group based in Texas, consisting of five singers: Avi Kaplan, Scott Hoying, Kirstin Maldonado, Kevin Olusola, and Mitch Grassi. Spend a night with these divine voices in Smart Araneta Coliseum this September 24, 2016 (Saturday) at 8 PM.

Pentatonix started off as a trio (Hoying, Maldonado and Grassi) then later on added Avi Kaplan and Kevin Olusola as official members of the group after breaking into the music scene with their own astounding version of Lady Gaga and Beyonce’s “Telephone” on Youtube. Since 2011, the young golden voices have already sold more than 2.8 million albums in the U.S. alone, bagged multiple Grammy Awards, sold out venues worldwide, have amassed over 1.4 billion views on their YouTube channel with over 10.1 million subscribers and appeared in the feature film Pitch Perfect 2. Their latest release, Pentatonix debuted at #1 on the Billboard Top 200 and Current Albums Chart and is certified gold by the RIAA. Pentatonix is known for their completely unique sound, which comprises of their sundry of self-shaped vocal arrangements, percussion and beatboxing, the band have risen from relative YouTube fame to worldwide recognition.

You can now purchase tickets at all Ticketnet Outlets or visit their website at ticketnet.com.ph. For inquiries, you can call Ticketnet at 911-5555.

(Minor edits were done to the information acquired from Pentatonix’s official website, ptxofficial.com)