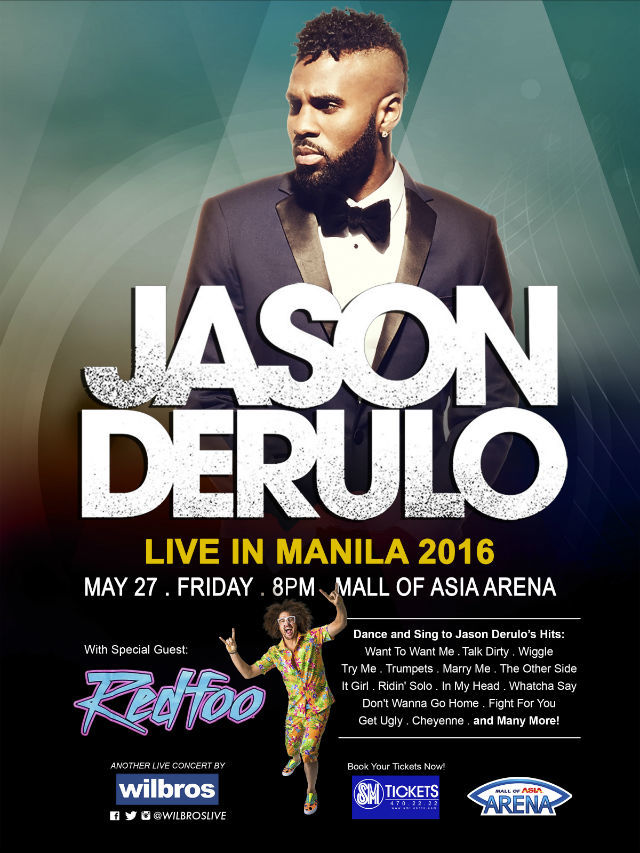 For his 2016 World Tour, Jason Derulo will be performing live in Manila on May 27 at the Mall of Asia Arena.

Chart topping hits of Derulo will be performed as he sees his Manila fans for the first time on his concert this May. In this concert, Jason Derulo surely won’t be ridin’ solo as he will be joined by one half of the LMFAO, Redfoo. The electropop duo LMFAO is behind the hit song “Party Rock Anthem” which reached the peak in international music charts in 2011.

Derulo became popular with his catchy hits such as “Wiggle,” “In My Head,” and “Whatcha Say.” One of his recent singles called “Talk Dirty” became famous in the Philippines as it has been played in radio stations and used as music to dance to in several variety shows on TV.

Derulo’s latest album “Everything is 4,” has a mix of pop, RnB, and dance, genre. His single “Want To Want Me” became the most added track in Top 40 radio history.

See Jason Derulo perform live at the SM MOA Arena on May 27! For more information, check out the details below.