It’s the middle of winter season in Japan, one of the best times to visit the country. Want to know how it feels like but don’t have the time or money, to go there?

Here’s your chance! Join the Japan Travel Festival 2016 being held at the French Baker Activity Area, SM Mall of Asia this weekend, from January 9 to January 10! And the best part is… it’s FREE! 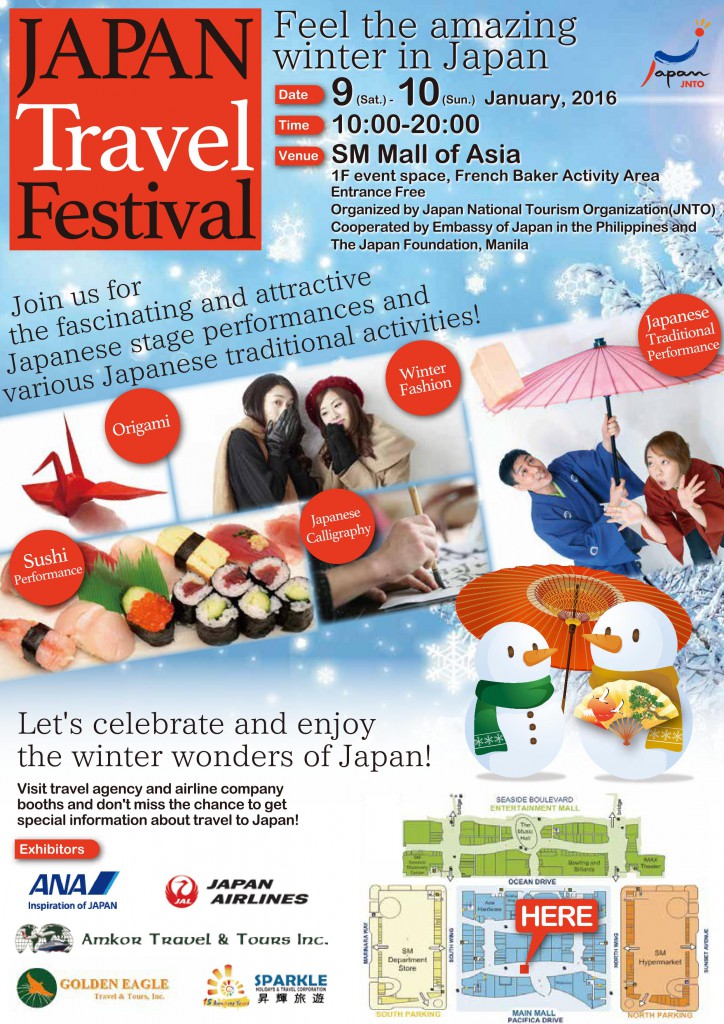 The Japan Travel Festival lets people experience a Japanese winter without being in Japan. Come and experience Japanese culture such as origami, sushi performances, and a Japanese calligraphy demonstration!

Also featured in the event are traditional Japanese and J-POP live performances, as well as a special performance by the all-Filipina group Kawaii 5 on January 9!

Don’t forget to visit the airline booths by Air Nippon Airways, Japan Airlines, as well as travel booths by Amkor Travels and Tours, Inc., Golden Eagle Travels & Tours, and Sparkle Holidays & Travel Corp. Special novelty items will be given away to those who will purchase a Japan tour and airline ticket from the booths during the event!

Visitors who will answer a questionnaire plus one lucky person who will like the Japanese National Tourism Organization’s Facebook page will receive a special gift.

This event is brought to you by the Japan National Tourism Organization, in cooperation with the Embassy of Japan in the Philippines and The Japan Foundation, Manila.