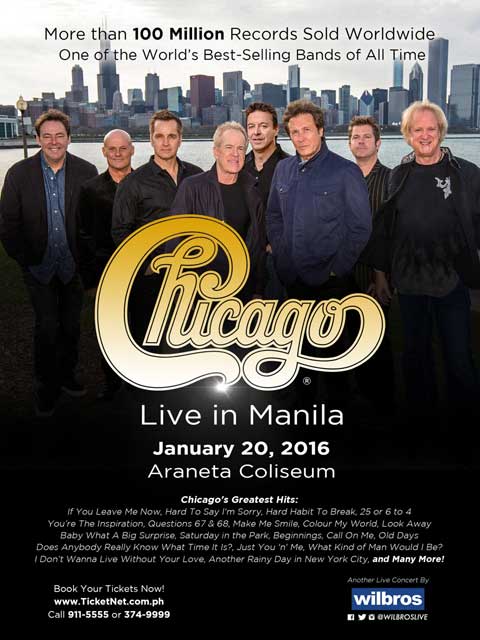 The sensational pop rock band Chicago will once again conquer the Manila stage as they are set to perform live at the Araneta Coliseum on January 20, 2016.

Chicago, with their popular hits “If you leave me now,” “Hard Habit to Break,” and “Hard to Say I’m Sorry” will be coming to Manila for the second time since their successful concert last September 2009. It is considered one of the most successful American pop rock bands, getting a following of more than a million fans worldwide. The band, known as “the legendary rock band with horns”, is the highest charting American band in Billboard Magazine’s list of Top 100 Artists of all time, placing at the #13 spot.

The band released their first album “Chicago Transit Authority” in 1969. Following their big hit, record sales of their album reached the 100,000,000 mark and other record breaking feats. Get the chance to see them live on their second Manila concert on January 2016 and sing along with their classic hits.

What: Chicago Live in Manila