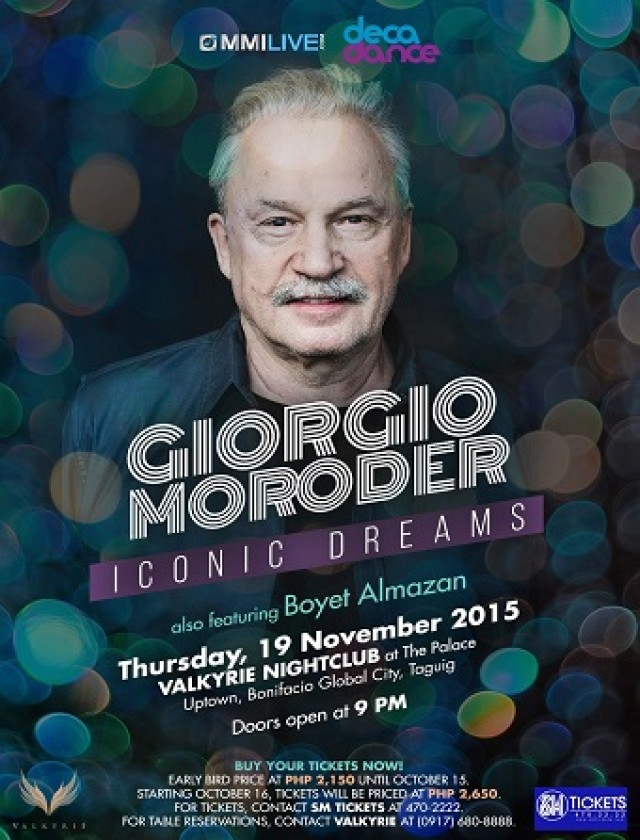 Ready to groove to some electro dance music?

The legendary songwriter and producer Giorgio Moroder will be coming to Manila on November 19, 2015 at Valkyrie Nightclub at The Palace, Uptown, Bonifacio Global City. The man who helped create and make disco music a rage in the 70’s and 80’s with hits such as Donna Summer’s ‘I Feel Love’, ‘Love to Love You’, and ‘Bad Girls’ as well as some of the most unforgettable movie themes of that era ‘Meet Me Halfway’ (Over The Top) and ‘Flashdance, What a Feeling’ is set to get the Manila crowd dancing with his iconic brand of music.

The award-winning music genius continues to influence the contemporary music scene and is considered as the most veteran DJ in the world. He is a collaborator of the new Daft Punk’s creation “Random Access Memories.”

So far, Moroder has won three Oscars, three Golden Globes and four Grammys in addition to recently remixing Lady Gaga and Tony Bennett’s “I Can’t Give You Anything but Love” and Coldplay’s “Midnight.”

His first single, the title track from the album, is bluntly titled “74 Is the New 24.”

Fans of electronic dance music will be in for a night of non-stop groovin’ featuring Moroder’s monster remixes from the 70s and 80s classics with video show featuring music videos and animations to pump up the vibe on the dancefloor.

Tickets are now available at Valkyrie Nightclub or at SM Tickets (smtickets.com or 470-2222). Doors open at 9:00 pm and tickets will also be available at the venue.

This event is brought to you by MMI Live and Decadance.