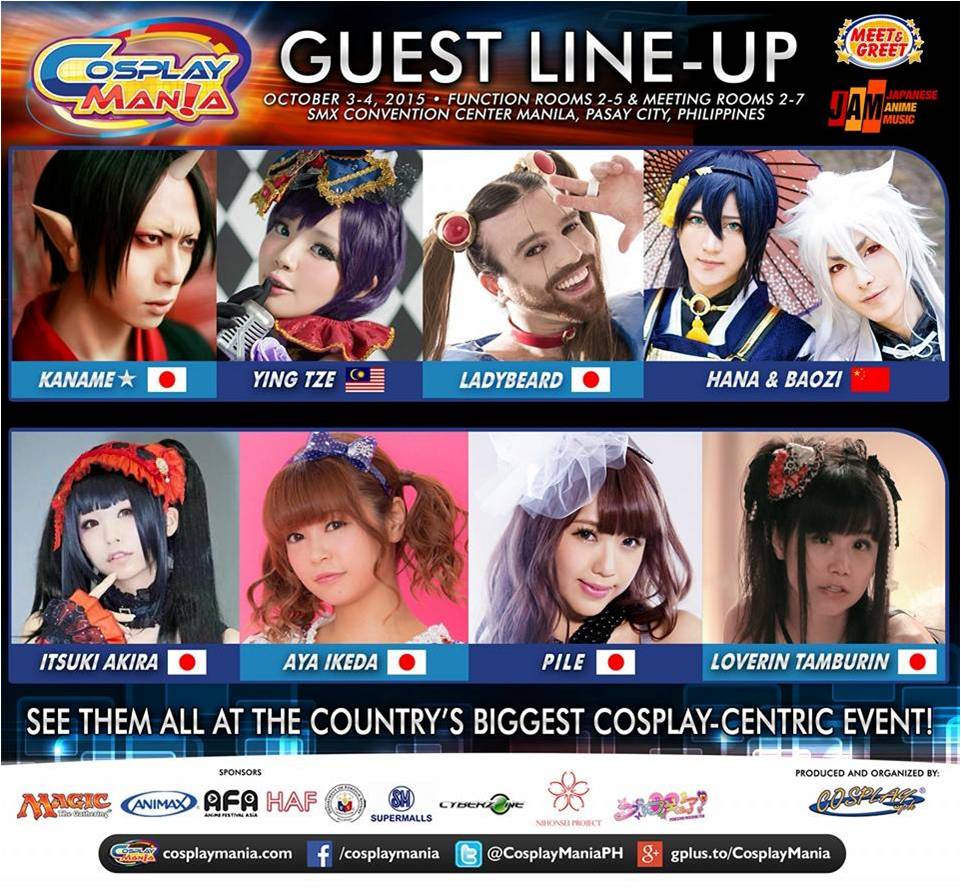 Cosplay.ph is proud to present its official guest line-up for Cosplay Mania 15, happening on October 3 and 4, 2015 at the Function Rooms 2-5 and Meeting Rooms 2 to 9 of the SMX Convention Center Manila, SM Mall of Asia, Pasay City, Philippines! Tickets are available at SM Ticket outlets nationwide or online via smtickets.com. See you all there!

Japanese cosplayer KANAME☆ needs little by way of introduction. One of the top five cosplayers in the world, he is best known for his portrayals of characters from Final Fantasy VII, Shingeki no Kyojin, D.Gray-man, and many others. KANAME☆ is one of the mainstays of Cosplay Mania, having attended the event since 2012.

Ying Tze is a cosplayer and costume-maker from Malaysia. She is best known as one of the most popular cosplayers of Culture Japan muse Suenaga Mirai — she has even garnered the attention of creator Danny Chu. Ying Tze has been all over Asia attending cosplay events as a special guest, and Cosplay Mania 2015 is her first time in Manila.

Hana and Baozi are a cosplay pair who hail from. They are renowned worldwide for their costumes and themed shoots for titles such as Touken Ranbu, FREE!, Card Captor Sakura, and Neon Genesis. This is the first time the pair will be coming to the Philippines.

Ladybeard is a wrestler, Heavy Metal singer, pop idol, and the embodiment of Bikini-wearing Awesomeness. An Aussie entertainer transplanted to Japan, he blends Japanese kawaii culture with muscle and vocal might, Ladybeard’s uniqueness has already made him an international star. It’s his first time in the Philippines, so give him a roaring welcome!

Cosplay.ph is the leading Cosplay website and online community in the Philippines. With primary business in Makati City, Philippines, we engage in various aspects of Cosplay such as organizing, managing and implementing Cosplay events such as conventions, contests, parades, and workshops.