We’re All Ears for this New Youth Jazz Orchestra 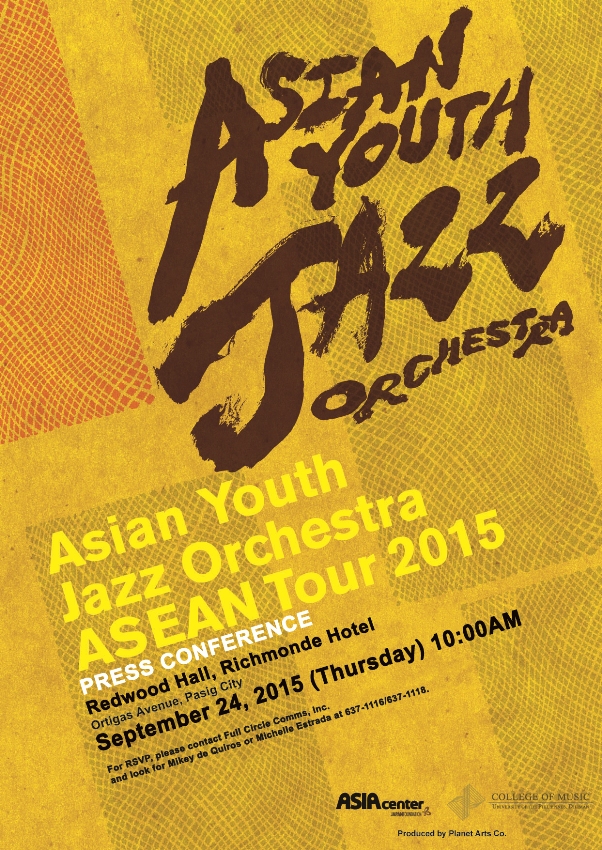 Following the successful Asian Youth Jazz Orchestra (AYJO) kick-off concert last February at the Shangri-La Plaza, the pioneer members together with the young musicians who passed the auditions in Japan, Thailand, Malaysia, Indonesia, Singapore, and the Philippines, are slated to render topnotch orchestra performances for the Manila leg of the AYJO ASEAN Tour 2015 on September 26, 2015 at the Meralco Theater.

AYJO is a project of The Japan Foundation Asia Center that aims to create cross-border networks of rising talents through international exchange and collaboration. Two Music Directors – trombone player and jazz lecturer Osamu Matsumoto and accomplished pianist Mayuko Katakura – lead the pack of 28 emerging musicians, five of which are Filipinos: Jacques Dufourt and Patrick James Aguilar from the UP College of Music; Rafael Rubio and Peter Joseph Ocampo from the UST Conservatory of Music; and Melvin Perido from Cavite.

An exciting new jazz synergy is fostered through the 10-day intensive training and rehearsals in Tokyo in mid-August in preparation for AYJO’s tour around Southeast Asia in September and October, and Japan early next year. The training, rehearsals, and performances allow the participants to create together original pieces that echo their emotions and artistic sensibilities.

What sounds like a good idea to do on a Saturday night? Taking a break and enjoying the rhythms of promising talents whose collected effort into creating music that resounds with brilliant energy across Asia will shine through their performances.

AYJO ASEAN Tour 2015 is produced by Planet Arts Co. The Manila leg is organized by JFM in partnership with the UP College of Music, where the jazz exchange program for students will be held on September 24, 2105.

For inquiries and reservations for the exchange program, contact The Japan Foundation, Manila (JFM) at 811-6155 to 58 and email@jfmo.org.ph. Visit www.jfmo.org.ph and www.facebook.com/jfmanila for updates.