Hop On the Bandwagon to Wanderland!

Bandwagon Philippines enters the Philippine music scene in style with its Festival Bus! 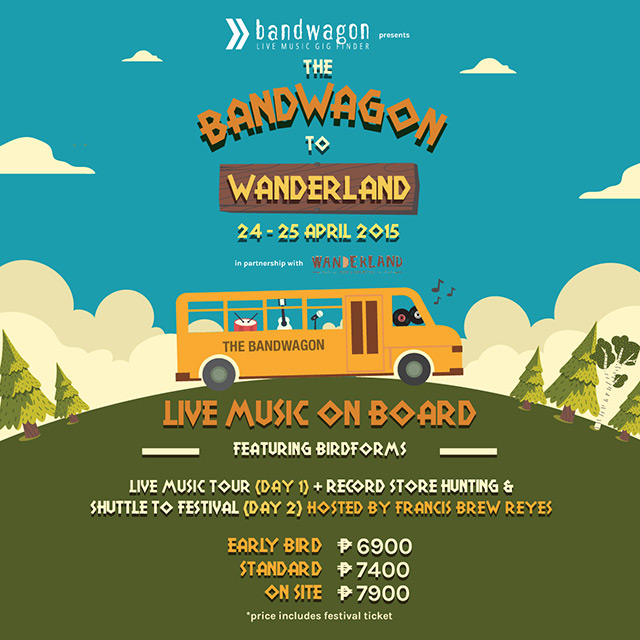 We’ve all heard of the annual Wanderland happening on April 25th and are, of course, very excited to go. But what if we tell you that you can get the party started a day early – with more fun and music to boot?

Arrive at this year’s most awaited music and arts festival by joining the coolest bandwagon ever! Bandwagon Philippines, the newest live music gig finder in the country today, presents THE BANDWAGON: Festival Bus to Wanderland!

This exceptional festival bus will bring passengers not only to the camp-themed festival of the year but also on a music journey across Metro Manila! Getting on the Bandwagon Bus gives its passengers access to:

• an intimate live set onboard by Birdforms,

• an exploration of live music venues in Manila through a carefully curated music tour,

• a vinyl record store tour where you can scour hole-in-the-wall shops and learn more about vinyl record collecting,

Tickets to the festival bus are at ₱1900 (standard) and ₱2400 (on site). Special rates are given to Wanderland attendees ranging from ₱6900 (limited Early Bird tickets) to ₱7900 (on site). For more information, visit their website.

Bandwagon made its debut in the Philippine music scene last April 6, 2015. It currently lists over 100 gigs, 200 local artists, and more than 50 venues in Manila alone. Since going live, the numbers continue to grow as artists, music venues and production outfits can easily key in their information, photos, videos and gig details using their submit a gig function. Visit their website today and know more about them.