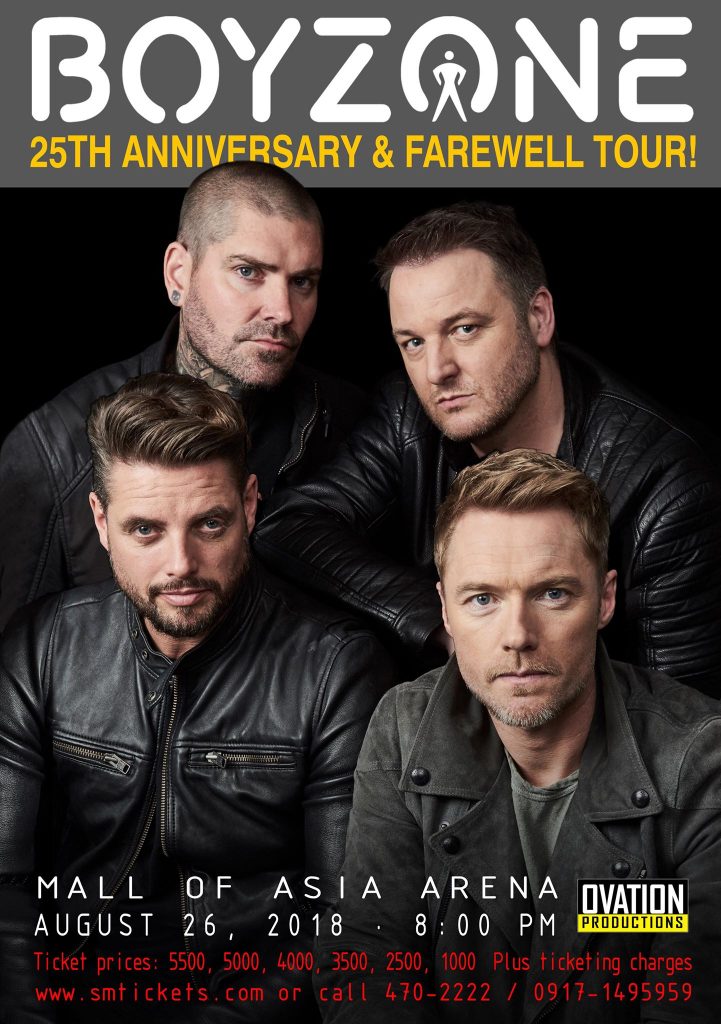 Celebrating their 25th anniversary for the final time, Ronan Keating, Mikey Graham, Keith Duffy, and Shane Lynch will be stopping by the SM Mall of Asia Arena this August 26 at 8 pm to perform their hit songs at the Boyzone 25th Anniversary and Farewell Tour.

Dubbed as the “boyband that never grew up” by UK-based media Express Newspapers, Boyzone has come full circle and released a new album, Thank You and Good Night, to be released in November 2018. The album reportedly holds songs written by English singer-songwriters Ed Sheeran and Sam Smith.

JUST ANNOUNCED:Irish boy band Boyzone holds their 25th Anniversary and Farewell Tour this August 26 at the Mall of Asia Arena! Ronan Keating, Keith Duffy, Mikey Graham, and Shane Lynch perform their career's biggest hits live in Manila together for the last time.Boyzone’s most loved hits include Love Me For A Reason, Daydream Believer, Key To My Life, So Good, Father and Son, Should be Missing You Now, Close To You, Words, Picture of You, Baby Can I Hold You, I Love the Way You Love Me, No Matter What, You Needed Me, What A Wonderful World, Everyday I Love You, What Becomes Of the Broken Hearted, among many others.Tickets on sale July 5 at smtickets.com and all SM Tickets outlets. #BoyZoneFarewellTourMNL is brought to you by Ovation Productions.

Boyzone is among the most successful 90’s pop bands, winning the MTV Europe Music Award for Best Album and Best UK and Ireland Act both in 1999. Fans will surely long for more of Boyzone after the concert and subsequent album release, as the hitmaking boyband is set to disband for the second time in 2019.

Boyzone’s last hurrah in Manila is made possible by Ovation Productions. Tickets are available at smtickets.com, with prices ranging from Php 1,060 for General Admission to Php 5,830 for VIP (ticket charges included).

This is a press release. Minor edits were made prior to publishing.
Sources: ABS-CBN, Express, Philippine Concerts