One Ok Rock is a Japanese band formed in 2005. It is composed of four members in charge of vocals, bass, drums, and guitar. Their name “one ok rock” originated from one o’ clock since they used to train every 1:00 in the morning.  This 2018, witness how this band will once again rock your world by serenading their way through your hearts!

Known for their thrilling live shows, One Ok Rock band recently performed two massive concerts at Shizuoka, Japan’s Nagisaen before a cumulative audience of more than 110,000 which was captured in the official live video for their single “Taking Off.” In addition, their latest album, “AMBITIONS” landed at #1 on the Japanese chart, selling over 250,000 units in its first week after being introduced to the public. 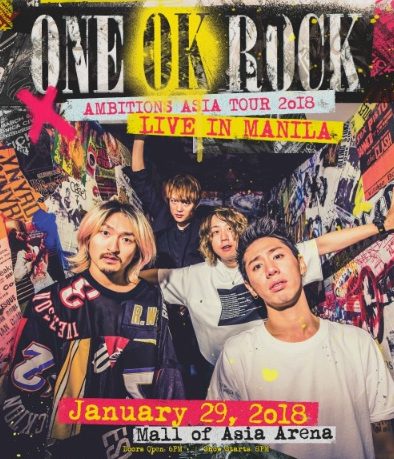 This coming 2018, One Ok Rock band will once again be heading to Manila to perform their breath-taking performances! Happening on January 29, 2018 at the Mall of Asia Arena, come and be part of their thrilling performances that will definitely knock you off your feet! Gates for the concert will open at 6:00 PM, and will start at 8:00 PM.

Tickets for the upcoming concerts will be on sale this coming October 14, 2017 from 10:00 AM- onwards at all SM tickets outlets nationwide. However, you may also buy your tickets online via www.smtickets.com. Tickets are priced as follows: