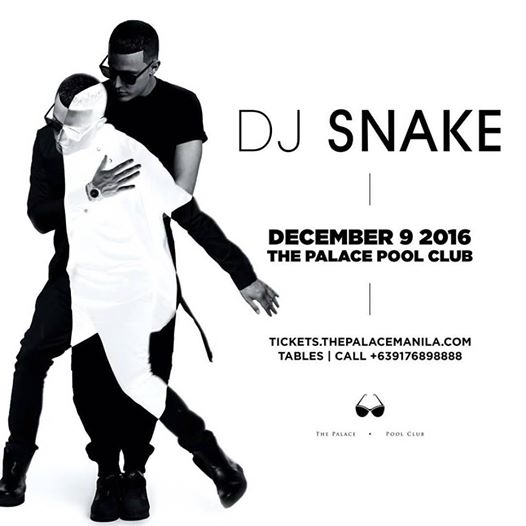 ‘Lean on’ hitmaker, DJ Snake is coming to Manila on December 9, 2016 for a party like no other. Image from The Palace Manila

French DJ and record-producer, DJ Snake is ‘bout to bring his sickest beats at the Palace Pool Club in Bonifacio Global City in Taguig on December 9, 2016.

Grammy-nominated producer DJ Snake debuted in the international  scene with “Bird Machine” where he collaborated with French act, Alesia, and has gained popularity worldwide with his 2015 smashing hit “Lean On”, a collaboration between MØ and Diplo.

Fox Weekly also labelled DJ Snake as “Artist To Watch” in 2014. In the same year, he was announced as one of the alternating support artists for the Summer Mothership Tour with Skrillex. Last January 2016, Forbes named him as one of their “30 Under 30 in Music”

Bring in your party buddy, experience lit music with carpe diem-ish vibe from the one and only DJ Snake! This event is mounted by Heineken.

What: DJ Snake LIVE at the Palace Pool Club

Sources: When in Manila, The Palace Manila