Tokyo Tower reigns over the skyline of southern Metropolitan Tokyo, standing taller than the Eiffel Tower, which it is often compared with. It used to be the tallest tower in Japan until TOKYO SKYTREE was opened in 2012. Now, the two towers share the Tokyo sky harmoniously, each gloriously overlooking the whole region, with a view of each other and serving the same purpose—to take people closer to the sky for them to view the beauty of the Kanto region and Tokyo as the blooming capital of Japan. Tokyo Tower with its vintage vibe in modern-day Tokyo.

Tokyo Tower was completed and opened in 1958. Now, the red and white tower poses a vintage charm, its simplistic structure and vivid color a stark contrast to the architecturally intricate buildings of the modern-day Tokyo. It carries with it a colorful history, which all began in 1957 when it was built shortly after World War II. It has served as a witness and a symbolic monument to many colorful events in Japan’s history—recovery from the war, the nation’s highs and lows, from the ’80s economic boom to the lost decade of the ’90s and the revival in the 2000s. Tokyo Tower is more colorful than what it appears to be. The Top Deck Lane is located on 1F of FootTown.

Tokyo Tower has three main sections, starting from the FootTown, which houses various shops, cafés, and restaurants. It is also where you can find Mugiwara Store dedicated to a myriad of One Piece items, as well as Cafe Mugiwara and Sanji’s Oresama Restaurant, on the first floor. From the third to fifth levels, you will find the “Tokyo One Piece Tower,” the only indoor One Piece theme park in the world.

The ticket counter and elevator for the observation decks are located on 1F. As you prepare for boarding, you will be provided with a multilingual voice system that will serve as your very own personal tour guide that will tell you about the history and facilities of the tower, and the landmarks around it.

The ascent to the Main Deck at 150m is an experience in itself. It has glass panels which let you see through to the outside as you’re taken farther away from the ground. For the acrophobic, it doesn’t take much effort to kick your fear to the curb and enjoy the ride and the amazing view.

The two-level Main Deck already gives you a good view of Tokyo’s cityscape. The Main Deck is spacious, a rectangular space where you can walk around to view the whole Tokyo area from north, east, and west to south. The Main Deck is a huge rectangular space with expansive windows. /IMAGE Courtesy of Tokyo Tower

On the first level of the Main Deck, there is Cafe La Tour where you can lounge and have some drinks and snacks, as you take in the views from the southwest side which includes the Tokyo Bay. There are also Skywalk Windows which make you feel as if you’re floating as you stand on glass and see below—this one may be a bit more challenging for those with a fear of heights!

On the second level is where the Top Deck Gate awaits. But before you find the gate, you will first have to go through a secret library that holds some precious open secrets about the tower. It’s a nice way to learn about the tower’s story. As you wait in line for your turn to board the Top Deck elevator, you can enjoy free drinks on the platform, still with stunning views of Tokyo. At 250m, the Top Deck is where the greatest appeal of the tower lies await. While Tokyo Tower is more of a traditional structure, its Top Deck has been renovated to be a futuristic dimension, made of geometric mirrors and LED lighting. Although it is relatively smaller than the main deck, the place still feels pleasant because of the vibrancy of the mirrors. 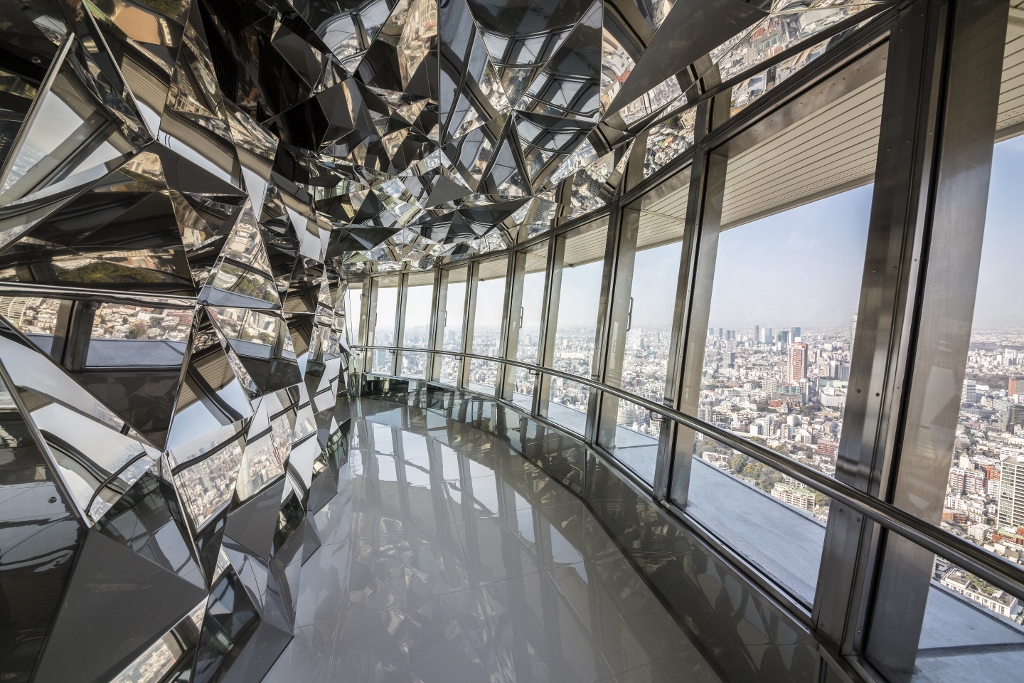 The Top Deck of Tokyo Tower has a futuristic design of geometric mirrors and LED lighting.

As your eyes wander around the vast landscape, some of the most prominent landmarks to find in the view below are Tokyo Bay and the Rainbow Bridge to the southeast side, Shibuya and Roppongi to the west, and the tower’s fellow skyscraper TOKYO SKYTREE far to the northeast. On fine days, you can see Mt. Fuji to the southwest side of the tower. TOKYO SKYTREE clearly stands out on the northeast side of Tokyo Tower. Also to the northeast side of Tokyo Tower are Toranomon Hills and Atago Green Hills Mori Tower (the two tallest buildings in the photo). To the right is Sakurada-dori, a major thoroughfare and famous spot to see Tokyo Tower; while the big patch of green is Shiba Park.

Seek a view of Tokyo Tower from the city at night and be inspired by its trademark illumination colors. The tower has two trademark lights: the Landmark Light, and the Diamond Veil.

The most famous nighttime image of Tokyo Tower is that which is lit up with a fiery red-orange glow that provides warmth and passion to the dark night sky—it is the widely popular winter version of the Landmark Light, which glows from October to July. The summer version, meanwhile, shines from July to September with silver lighting mixed with the red lights, which aim to give coolness to the warm season. 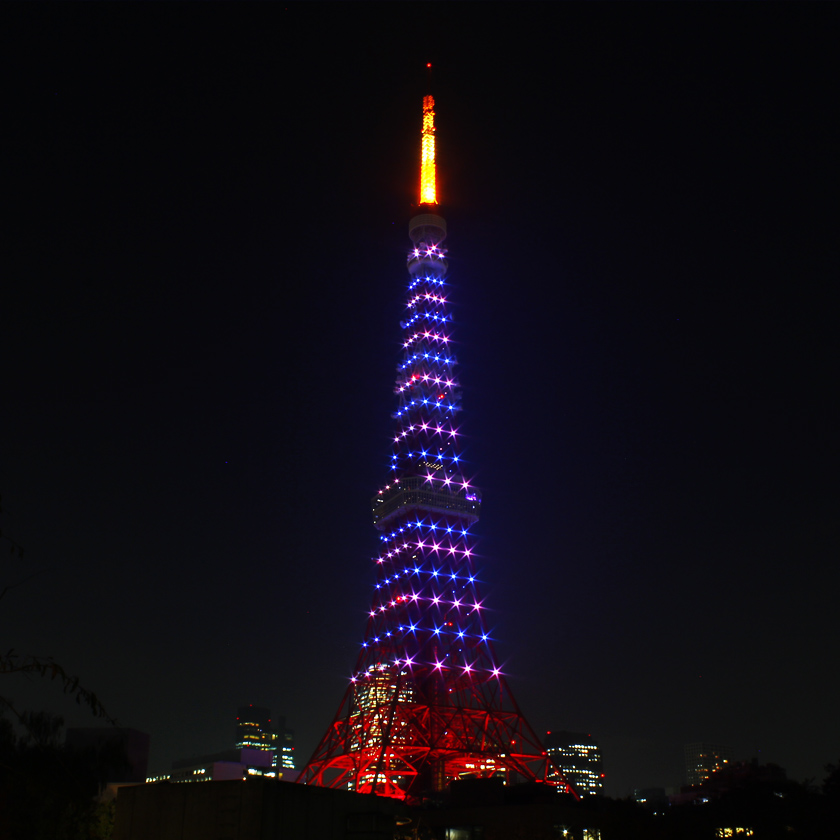 The lighting of Tokyo Tower usually starts from sunset and glows until midnight. Some of the best spots to get a view and take photos of Tokyo Tower from are the Tokyo City View Observation Deck in Roppongi Hills, Keyakizaka-dori (Roppongi Hills) which is also illuminated in the Christmas season, Shiba Park, Zojoji Temple, and, of course, from the Top Deck of TOKYO SKYTREE.

• There is a set of stairs from the ground floor which lets you go on a scenic walking tour going to the Main Deck. It is open on weekends and holidays from 11 am to 4 pm but may close due to bad weather. Ticket costs ¥900/adult.

• The mood is different during the day and at night. If you want to get a feel of both in one visit, schedule your visit late in the afternoon or at sunset.

• There are coin lockers available on the first floor of FootTown, from 9 am to 10 pm.

• From Tokyo Station, it is also convenient to use the Tokyu Bus which takes about 30 minutes to arrive at Tokyo Tower. A ticket costs ¥220 for adults and ¥110 for children.

Also read: TOKYO SKYTREE℠: An Unconventional Match for the City