Since we are optimistic, we’d say that the Philippines is “blessed” with hundreds of volcanoes (both named and unnamed, including potentially active and inactive ones), 20 of which are categorized as active. PHIVOLCS explains that the country “sits on a unique tectonic setting ideal to volcano formation,” also known as the Pacific Ring of Fire.

Although the image of a volcanic eruption is quite scary, volcanoes are actually some of the most beautiful natural spectacles in the world, featuring unique profiles and supporting life around them. When the volcanoes are dormant, they are a great place to truly appreciate nature and enjoy some nature-loving activities like trekking and photography. 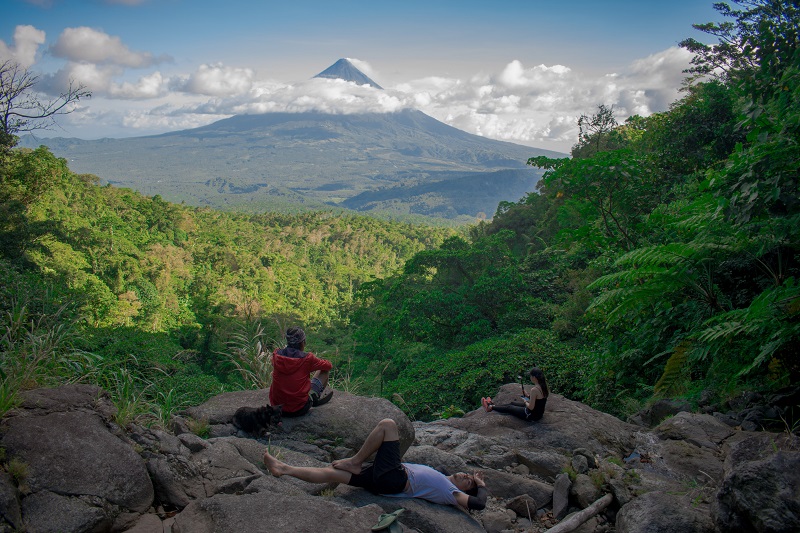 Standing at 2.46 kilometers high, Mayon Volcano is surrounded by three cities in Albay province, about 11 hours away from Manila if you travel by car. It has a record of 51 eruptions, with the most violent being recorded in February of 1814.

Mayon Volcano has captured the attention of the world in many ways. With its almost perfect conical shape, it is undeniably one of the most beautiful volcanoes and most photographed in the world. Even now that it is drawing residents away, this volcano still attracts a lot of admiring spectators. 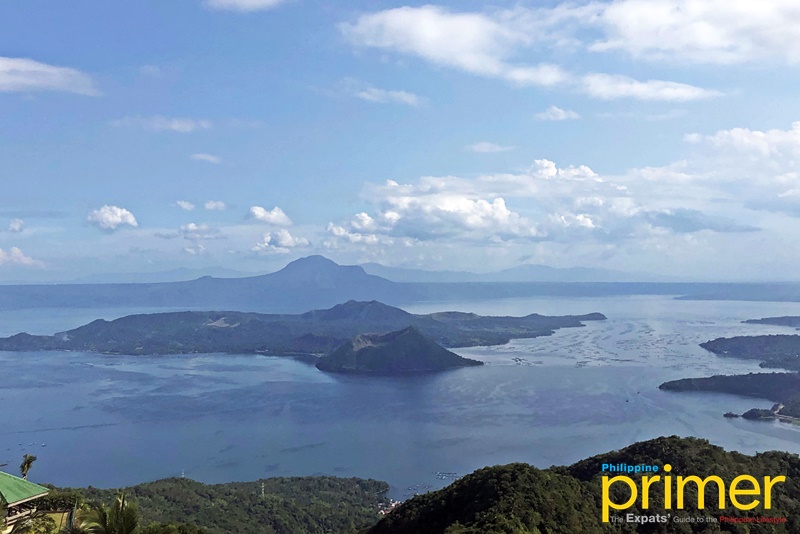 Located in Batangas, Taal Volcano is also one of the most interesting volcanoes the Philippines has. Ironically, as a caldera volcano, it’s also the deadliest. Technically speaking, Taal Volcano is a volcano island contained inside Taal Lake which is also bounded by Taal Caldera 25 kilometers wide. On Taal Volcano island is the main crater lake which is 80 meters deep. Its most memorable eruption was in 1754, which lasted for almost seven months devastating the nearby Lipa and Tanauan in Batangas.

Taal Volcano is only about two hours away from Manila via Talisay or San Nicolas, Batangas. Taal Volcano and Lake is a very famous sight from the high ridge of Tagaytay. Trekking at the volcano island is also a very popular activity. 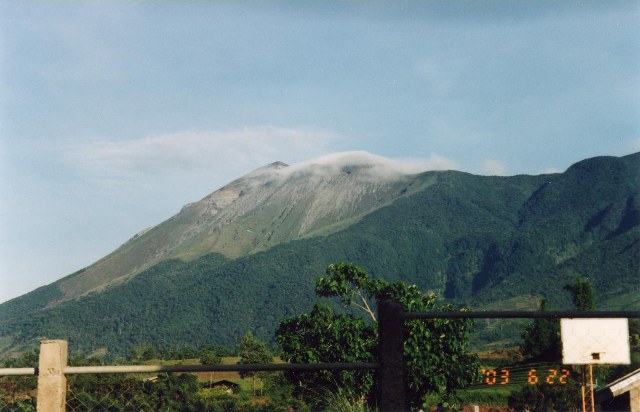 With a total of 30 recorded eruptions, Mount Kanlaon is the third most active volcano in the Philippines. It is 2.43 kilometers high and is located in Negros Oriental, near Bacolod City. Most of its eruptions have been considered phreatic and mild, characterized mainly by ashfalls. It was only in 1902 when the volcano erupted with lava.

Mount Kanlaon regularly attracts tourists who seek adventure in hiking or relaxation in its hot springs. There are three hot springs around the volcano, namely, Mambucal Hot Springs, Bucalan Hot Spring, and Bungol Hot Spring. Visitors can reach Kanlaon for two to three hours by land from Bacolod City. A neighboring volcano of Mayon in the Bicol region, Bulusan Volcano is located in Sorsogon province, in the southern part of the region. Most of its eruptions have been phreatic, which means that little damage was caused to the nearby towns. Ash explosions are very common to Bulusan Volcano, which can last for months to a few years. Its worst eruption was recorded in 1918 which lasted until 1922, causing some landslides and lava flows.

Mount Bulusan has gifted its surrounding towns with natural hot springs that both locals and tourists can enjoy. Trekking is also a very common activity, letting hikers find amazing views of the ocean and a sea of clouds. The nearest airport is in Legazpi City, Albay, where you have to take a four-hour bus ride going to Bulusan. Standing on Camiguin Island in the Bohol Sea, Mount Hibok-Hibok is a young volcano and relatively a small one compared to the other stratovolcanoes in this list, with a base diameter of 10 kilometers. It has five eruptions in recorded history, the most significant of which is the consecutive eruptions from 1948 to 1953, which killed hundreds of citizens nearby.

Hiking is a common activity at Mount Hibok-Hibok. Camiguin Island can be reached via boat from Cagayan De Oro. Located within the boundaries of Pampanga, Tarlac, and Zambales, Mount Pinatubo is one of the most famous volcanoes in the country. While it has only had two recorded eruptions, one has been the most historic and devastating eruption in the Philippines. The 1991 eruption displaced tens of thousands of locals and affected the whole Luzon island. It was the second largest eruption of the 20th century (next to Novarupta in Alaska).

Now, Mount Pinatubo is a beautiful scenery and source of livelihood for the people around it. The place is often brimming with tourist activities like trekking, camping, relaxing at the hot spring, volcanic mud spa, and more. Pinatubo is only two to three hours away from Manila.

where can i buy brand name cialis online

how to order cialis from canada

cialis without a doctor’s prescription

if you stop taking lisinopril

how many levels of appeals are there health care http://zithrozpack.com – zithromax tri pack directions

what does viagra work for inbreker viagra

what is ivermectin used to treat what does ivermectin treat [url=https://ivermectindelta.com/ ]ivermectin covid19 [/url]

side effects for ivermectin https://stromectoliver.com/

where to get ivermectin https://ivermectinchik.com/

side effects of accutane https://isotroinisotretinoin.com/

buy prednisone with paypal how to order prednisone

ivermectin to treat covid can you buy ivermectin over the counter

ivermectin covid studies where can i get ivermectin

Thanks for finally writing about >6 Most Active Volcanoes in the Philippines |
Philippine Primer <Loved it! http://herreramedical.org/azithromycin

how to order propecia online

cialis without a doctor prescription https://cialiswithdapoxetine.com/

what is ivermectin used for ivermectin cream for humans [url=https://ivermectindeltarx.com/ ]ivermectina precio [/url]

ivermectine how long until ivermectin starts to work

ivermectin solubility can i buy ivermectin over the counter

provigil reviews side effects of modafinil

where can i buy ivermectin and covid

hydroxychloroquine where to buy plaquenil online

hydroxychloroquine where to buy plaquenil online

buy priligy in the usa

https://buypriligyhop.com/ – how to buy priligy as a child

https://buyzithromaxinf.com/ – where can i buy methotrexate

provigil for sale what is provigil

pay someone to write my paper custom paper writing services

chlorquin hidroxicloroquina what is in hydroxychloroquine

http://buyplaquenilcv.com/ – where can i buy plaquenil without a doctor prescription

modafinil over the counter provigil generic

provigil dosage provigil over the counter

essay writers do my paper

how to access the darknet market black market prices for drugs

buy an essay write my paper

side effects of plaquenil

do my papper writing service

help me write my essay write a essay for me

do my essay for me essay rewriter

where to buy metformin cream

writing paper pay someone to write my essay

essay writers do my paper

dissertation writing do my paper

how to get on darknet market spurdomarket market

how to write an essay write my essay for me

write my paper buy an essay

write my essay for me essay editor

essay maker do my papper

do my essay essay bot

darknet gun market how to get on darknet market

the wall street market darknet how to get on darknet market

essaybot write my essay for me

do my papper cheap essay writer

are there any darknet markets left daeva market

grey market darknet what is the darknet market

argument essay do my essay for me

cialis over the counter in canada

where can i buy cialis cheap

ivermektiini 6 Most Active Volcanoes in the Philippines | Philippine Primer http://ivermectin1.com/ ivermectin side effects

where to buy tadalafil on line

how to buy finasteride

where to get albuterol pills

how to get doxycycline prescription

how much is prozac

where can i buy azithromycin

how to get albendazole

In it something is. Thanks for an explanation. I did not know it.

how to order viagra online in india

hur kan jag kГ¶pa viagra https://llviagra.com/ – why do i get a headache after i take viagra problemas secundarios del viagra

This article was made in the year 2018 but I saw another article that was made in 2010 and it says that Mount Kanlaon has 33 historical eruptions.

there are actually 300 volcanos in the Philippines but 23 of them are active 110 active volcanos are in Japan.

You are wrong. Philippines is volcanic. Most of these dormant volcanoes are not counted due to long inactivity. In Leyte Island there are at least 25+ volcanoes alone. But only a few of them are active per PHIVOLCS record. All volcanoes are dangerous. ….

DOT, IAFT-EID Lift Age Restrictions for Fully Vaxxed Travelers
The Inter-Agency Task Force for the Management of Emerging Infectious Diseases and DOT announced the easing of age restrictions for travelers below 18 years old and above 65 years old.

DOT: More than Half of PH Tourism Workers Already Vaccinated
The Department of Tourism announces that more than half of tourism workers in the Philippines are already vaccinated.