For those with a sweet tooth, the Philippines has lots to offer —most of which are uniquely Filipino. Born from the amalgamation of countless culinary influences throughout the long and colorful history, mixed with local ingredients and flavors, a ton of interesting desserts and snacks have resulted. So skip the cake and tea for another day, and grab these delicious Filipino treats instead. Enjoy! 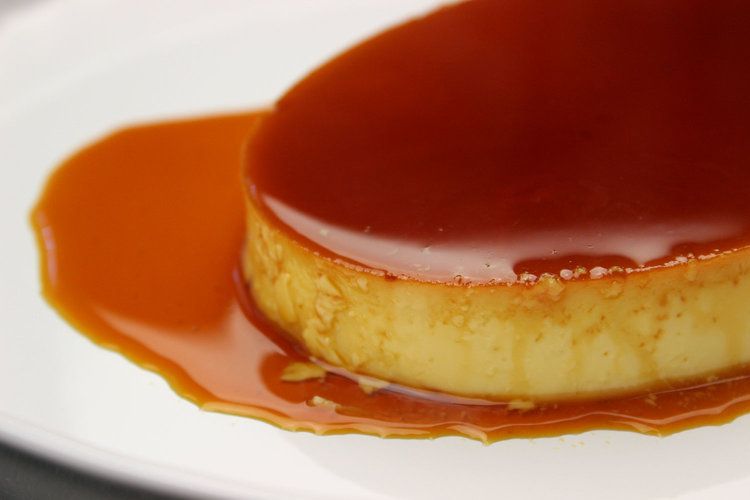 Leche flan is the local version of caramel custard that is usually served during fiestas and family gatherings. With many varieties found across the globe, leche flan won’t seem new to many. This variety, however, is richer as it uses more egg yolks, sugar, and condensed milk, resulting in a sinfully delicious cream that will make you forget that you’re on a diet. It is a simple yet decadent treat topped with thick caramel syrup. It melts in one’s mouth and has a rich, silky smooth and creamy custard texture. 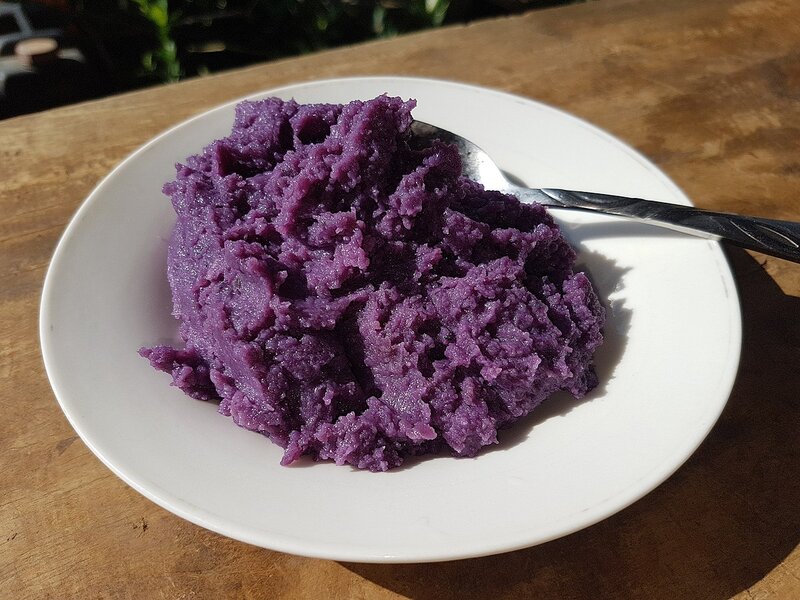 Ube halaya is a sweet purple jam usually eaten on its own as a snack, incorporated in desserts such as halo-halo, or as a base in ice cream and pastries. Although there are many ways of using ube (purple yam) in making desserts, preparing and cooking ube halaya is one of the most popular things to do . For most recipes, the ube is peeled, boiled, mashed, and sweetened with condensed milk or latik (coconut cream curd) before cooking in a saucepan with butter until thickened. 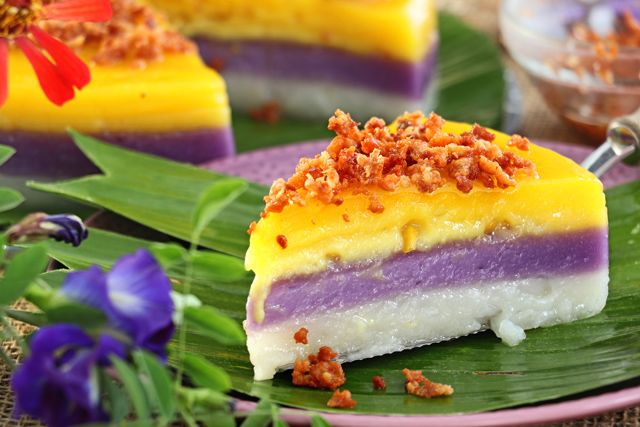 This sticky rice cake —one of the many in the Philippines— is made with galapong (glutinous rice flour), coconut milk, sugar, and coloring has a chewy pudding-like texture, and is often seen at birthdays or fiestas. It is also one of our most vibrant-looking delicacies as it is composed of 3 layers different colors and is usually served with latik or dessicated coconut. The layers are typically flavored with local ingredients such as coconut milk, jackfruit, and ube. 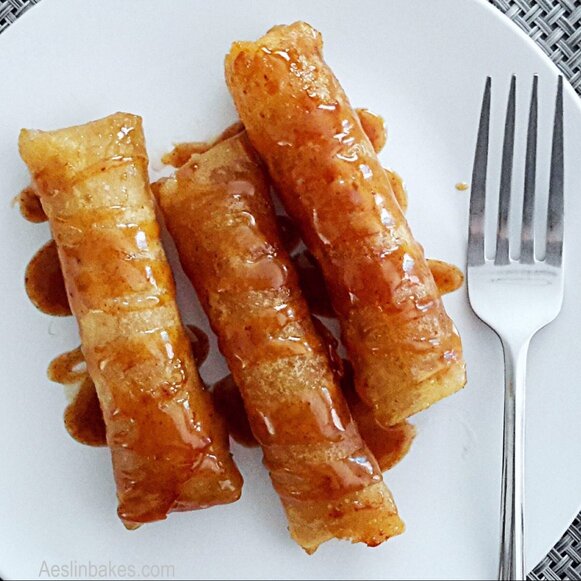 Arguably the most popular street food among Filipinos, turon is made of thinly sliced saba (a native banana variety) rolled in a spring roll wrapper, coated with brown sugar, and finally deep-fried. One can also add slices of jackfruit in the filling for another layer of flavor. Since turon’s ingredients are both cheap and easy to find, it is one of the most accessible snacks in the country as these sweet and savory treats are often sold by street vendors along the street. 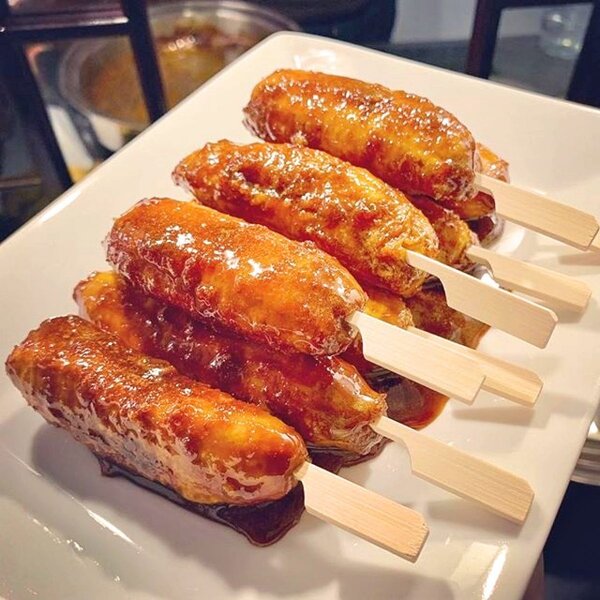 One might consider banana cue as turon’s much simpler cousin. It is made of deep-fried saba coated in caramelized brown sugar, skewered on a bamboo stick, and sold in makeshift snack stands. Another variant of this snack is kamote cue where instead of the usual saba, kamote (sweet potatoes) are used. Since both are common afternoon snacks, one can easily found these treats being sold along the streets. 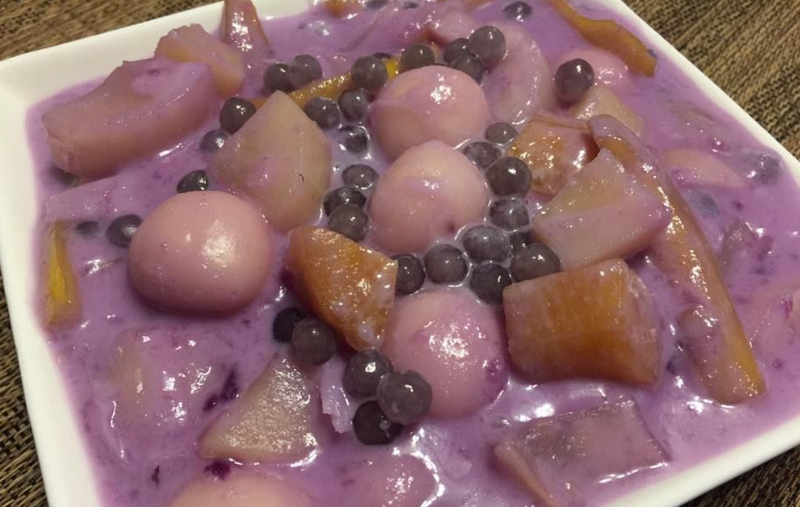 Ginataang bilo bilo, which translates to “glutinous rice balls in coconut milk,” is a sweet and rich coconut milk-based dessert made with tapioca pearls, glutinous rice balls, saba, sweet potatoes, ube, and jackfruit. The ingredients are cooked together until a thick gruel is formed. What’s great about ginataang bilo bilo is that although it requires lots of ingredients, one can customize their recipe by adding only what they like akin to the Japanese oden. 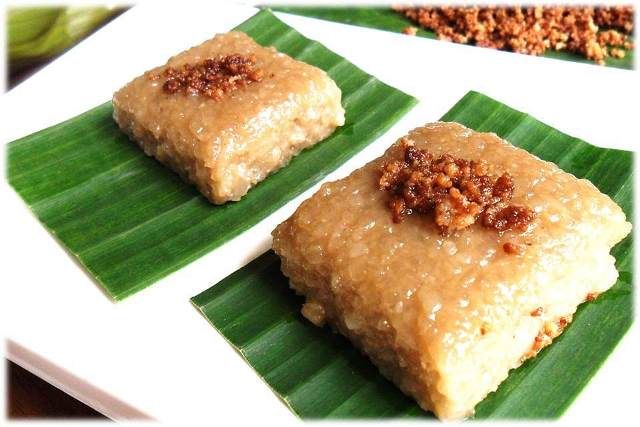 Biko is a crowd favorite in local celebrations such as graduation parties, family gatherings, and of course fiestas. Biko is a delicacy made of coconut milk, brown sugar, and glutinous rice topped with latik. It is gooey, sticky, and nutty, making it different from other Filipino rice cakes. Compared to other rice cake recipes, preparing this requires a lot of patience and strong arms because one will be required to constantly stir the mixture for a long time to prevent it from sticking to the pot.