Business Talk with Aisa Mijeno, CEO and Co-Founder of SALt

Aisa Mijeno is the CEO of SALt (Sustainable Alternative Lighting), which she co-founded in 2014 with her brother, Raphael Mijeno. SALt is a tech startup the Mijeno siblings call a social movement, motivated by tribal communities who do not have access to electricity.

Their flagship product, the SALt lamp, won the Good Design Award 2018 presented by the Japan Institute of Design Promotion, a Japanese comprehensive design evaluation and commendation system. The SALt lamp can be powered by saltwater through metal-air technology. 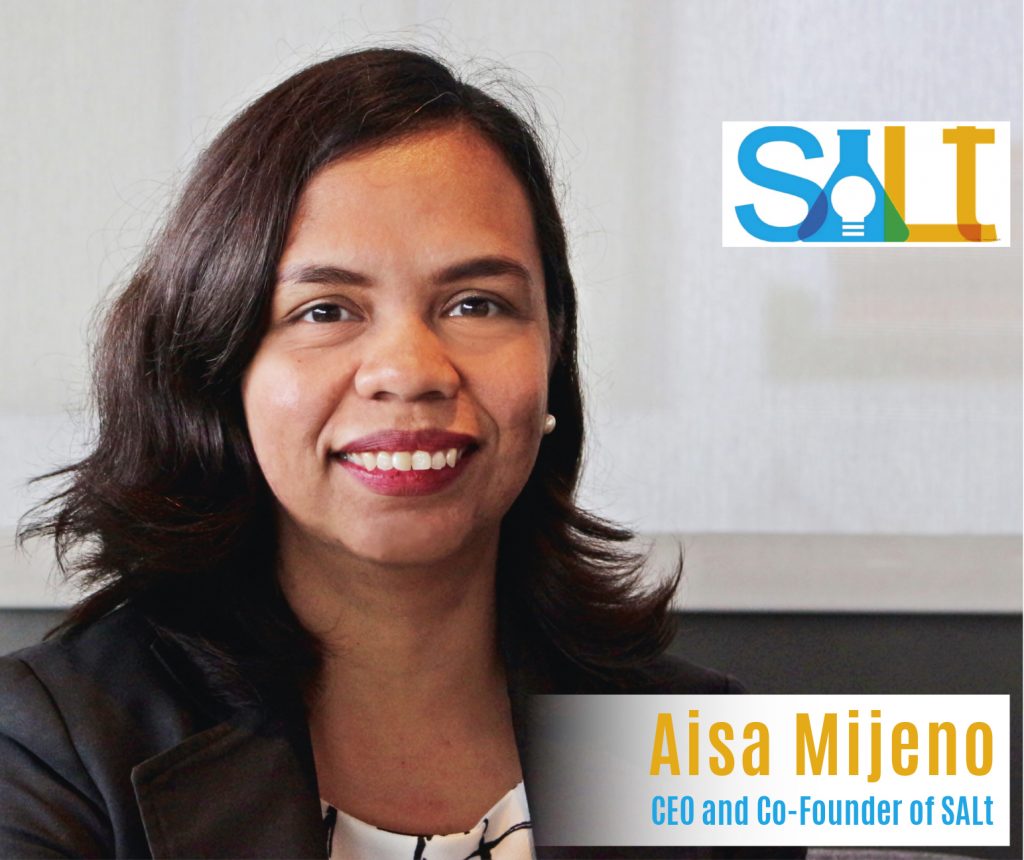 What is SALt and where did the idea come from?

We are promoting SALt as a social enterprise. What we do is we try to address the energy access gap first in the Philippines. Our country is an archipelago, which makes it hard to connect every single home to the power grid. We wanted to address that gap through the use of the most abundant natural resource we have: saltwater or ocean water.

It started when I decided to leave my comfort zone. I was working in an industry for about four years before I left. You could say I experienced a quarter-life crisis because I could not see myself working with the same company for the next forty years. I decided to leave that job, travel around the country, and volunteer in various NGOs, something that led me to find out what I really wanted to do with my life.

I took volunteering seriously after a year of doing it and applied for a job at Greenpeace Philippines as a directorial campaigner. That’s where everything started for me, especially in terms of service. We would travel across the Philippines and do immersions in tribal communities, those that other travelers would not have access to. That’s where I got to see the problem we are trying to solve.

Most of these communities are not connected to the power grid, which meant they did not have ready access to electricity. They still used fire-based lighting systems to light their homes, like kerosene lamps. That was the spark that led me to the idea for SALt.

I already had a background on fuel cells and fuel cell technologies as an engineer, which led me to ask, “Why not use salt water as a way to generate enough power to light up a LED bulb?” The timing of this idea could not have been better. LED doesn’t need that much to power it up, and without the developments in LED technology, SALt would not have existed.

I then decided to join the academe so I can get access to facilities for product development. I became a lecturer for De La Salle University in Lipa, Batangas, where I also started my research regarding the fuel cell that would power up the lighting system.

A common misconception about SALt is that the innovation was the lantern, but it’s not. It’s what’s inside the lantern that’s the real innovation: the fuel cell that uses salt water as its power source. The lantern was merely an application of the technology. If we can further develop this, just imagine how many uses we could find for it.

After that, we won a competition that helped us become the social enterprise we are now.

What are some of the biggest achievements you’ve made?

One of the biggest achievements we have is when we started deploying the lanterns. It wasn’t meant for commercial use when we first deployed them; it was more for a test run, to see if the technology worked. That’s what has been happening with us for the past two years: we deploy the lantern, evaluate, and go back to improve on the design of the lantern. It’s difficult to put up a hardware-based startup. It’s something that requires a lot of capital, and for us to still be around is already an achievement in itself. Being able to come up with a working version of our product that’s commercially viable is an achievement for us.

What are some of the bigger setbacks you’ve faced in trying to get out of the development phase?

You have to be smart about dealing with investors. Aside from being capital intensive, you have to have the correct financial protections and get the cash flow, which makes it different from software startups.

What you need to put up a software startup is usually a group of people with programming knowledge and a good internet connection. For hardware startups, especially those that get to a point of mass production, they usually go to China to save on costs. We didn’t want to do that. We wanted to promote SALt as a 100% Filipino-made product.

We’ve got two partners as of today. One of them is a semiconductor company located at Laguna Technopark. The other one is San Miguel Yamamura Packaging Corporation. They are the ones helping us with all of our packaging needs: the box it comes in, the plastic, and even the design of the package.

What are you looking at for SALt and your plans for the future?

Our short-term goal is deploying our first 45,000 units. We want to distribute them in the Philippines, but we’re looking into a different strategy now. We’ve been getting more attention outside the country than in it, which is why we’re changing our approach.

We’re having a bit of a dilemma about releasing the product in retail here in the country. It’s easier for us to sell the lantern in bulk to private companies for their corporate social responsibility (CSR) projects, which is our current business model. The problem is we cannot see the lantern being sold in the country because of its suggested retail price (SRP). We’re looking at an SRP of P999, which is expensive for a lighting system at least in the Philippines. However, if we were to release that in Europe and the US, it’s easier to sell because it’s not as “expensive” for the people there.

How would you describe the way you run SALt?

We give a lot of autonomy to our team. I let each team decide which methods would be the best for the company. I still gather the ideas during meetings before we brainstorm, but I still let them decide on things within the company.

How big is the team behind SALt?

We’ve got seven people in the team, excluding the manufacturing side. The good thing with our manufacturer is that we get to tap their design engineers. If we include them, it’s about 60 people, which lets us hand over all the manufacturing tasks to them, even if we always visit the plant to check on their work.

There’s Dado Banatao. He’s partly one of the reasons why we were able to put up SALt in the first place, because of his achievements.

I think the education system in our country should be promoting people like him to our engineers so they have someone to look up to, a role model to inspire them. Imagine being born to a farmer in Cagayan and becoming one of the most successful businessmen in Silicon Valley! Unfortunately, every time I ask students who Dado Banatao is, only a few raise their hands. These are the kinds of people we should be promoting.

The other person isn’t really related to technology, but more on life principles. Christopher McCandless, the inspiration behind “Into the Wild,” lived a tragic life, but he’s someone I look up to. He’s a guy who gave up everything to meet people and experience the rawness of life. I wanted to experience life the same way he did, but not necessarily end up dying the same way.

What is a “typical day” of work for you?

We always have meetings in the morning, but the more serious ones happen every Wednesday. It usually involves talking about the things we have to do and any activities we have for the day. We tend to our emails two hours before we head home, along with a few phone calls to our prospect NGOs and foundations.

What’s one thing that motivates you to do better with SALt?

It’s the people we want to serve, the people who will benefit from the lantern. They’re the main reason why we started SALt in the first place. Along the way, there were a couple of times when we wanted to give up. We’ve been through many ups and downs, but every time we’re at that point of giving up, what we like to do is to go back to the tribes we are helping and immerse ourselves. That’s how we renew our motivation and keep on pushing forward.

when writing an essay https://student-essay.com/

writing cause and effect essay

on writing the college application essay

write my essay 4 me

writing cause and effect essay